Index categories: These are categories in which the objects are essentially elements of a partially ordered set, and there exists at most one morphism between two objects. One example would be

be an index category. A functor

is said to be indexed by

. What does such a functor look like? If this functor is fully faithful, then

will also be an index category. However, even if it is neither faithful nor full, there is some structure that is imposed. For example, if

, then we can index a subset of objects in

, and ensure that morphisms exist between all such indexed objects (mapping objects of lower indices to those with higher indices).

. Then the limit is an object

such that there exists a morphism between

and every object (including itself), and if

are two such objects with

is the functor between

), then the three morphisms under consideration commute.

So what exactly is happening here? It is easy to see that

is the initial object in

Set be a functor which maps

is mapped to the morphism

is the unique limit.

Similarly, the colimit is the final object of

is any partially ordered set.

is said to be filtered is for any

is fitered, and so is any subset of it. However, if

is the only relation we know, then this is not a filtered poset (partially ordered set).

are categories, are considered to be adjoint if there is a natural bijection 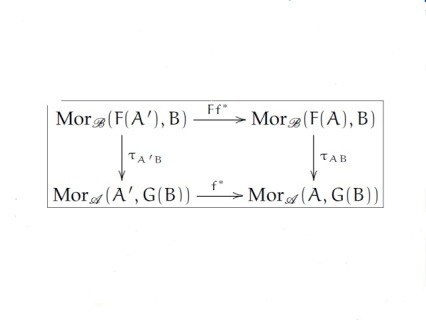 Philosophy behind adjoint functors: These ensure that at least the set of morhisms between objects (both in the domain and range) are “isomorphic” to each other, whilst not being concerned about the objects themselves.